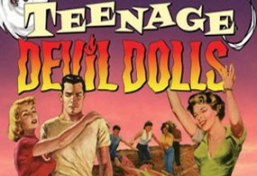 Hi! Today on Schlock Therapy I’m going to talk about “Teenage Devil Dolls”! It’s a gritty, sometimes unnerving, often uproarious romp through the life of a sweet young drug addict who, in my opinion, got what was coming to her.

First off, let me say that there are NO DEVIL DOLLS of any kind in this movie WHATSOEVER! If you go in thinking, “Man, I can’t wait to see me some bad-ass, butt-kickin’ Devil Dolls”, then sorry. You’re gonna be really disappointed.

If, on the other hand you’re saying to yourself  “I’d like to watch a troubled, slightly irritating young woman careen helplessly down the path to self destruction by getting involved with some corny, stereotypical drug dealers on motorcycles!” then boy, are you in luck!

The first thing you’ll notice as the narrator introduces the film’s “heroine*”, Cassandra Lee, is that there is no recorded dialogue. The only voice you’ll hear is the narration. This is the way the ENTIRE movie is filmed. It’s really like a silent movie…but with sound! Pretty clever eh? I read somewhere that leaving out the dialogue was a last-minute budgetary decision, but I’m gonna go ahead and to chalk it up to good old-fashioned genius.

So anyway, Cassandra graduates high-school and instead of going to college she decides to get chummy with this unusually well-dressed and clean-cut motorcycle gang. Don’t let their looks fool you though, because they soon introduce our unlucky friend to “reefer”! Reefer is actually pot, but in old movies they call it reefer because of copyright laws I think. After that, it doesn’t take long for her to move on to heroin. (Seriously, it only takes her like 5 minutes. Which is good, because the movie is only an hour long.)

Some more stuff happens to Cassandra, like she gets married and owns a dog and gets arrested, but this is all building up to the really funny part of the movie: heroin withdrawal scenes!

I’m including a short clip (below) as an example of the film’s painfully honest/humorous depiction of withdrawal symptoms, which I’ll assume is 100% accurate and true-to-life. Pay close attention to the ear-piercing, high-pitched sound effects that accompany the action here. My addict readers will have to help me out here, but I believe that these loud, irritating squealing sounds are a very common side effect of the drug.

I won’t spoil the ending for you, because I actually can’t really remember what happens next, but eventually the movie ends and they play a theme song. Overall, I give the movie somewhere between 4 and 9 stars, depending on the alcohol content of my drink.

*Get it?! Heroine/heroin! Pun intended!